Friday the 13th turned out to be a good day for me.

Of course that’s not unusual since 13 is one of my lucky numbers. But it was unexpected considering the week I’ve just experienced – more about that later.

I read an interesting article about Friday the 13th this week over at 7witchescoven.com.

Here is an excerpt:

Let’s face it, no one stays in a state of perfection or completion for very long periods of time. We must always accept the challenge to continue the cycle and begin again. 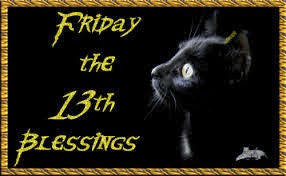 Last week I found out I have Multiple Myeloma. A full week later, on Friday the 13th, I found a local Hematologist / Oncologist and I have an appointment on Monday! This was especially good because no one seemed to know what I should do next and I was just floundering around waiting on some kind of instructions. That’s not a good thing.

Sometimes you just have to take matters into your own hands which is what I did.

Now I have embarked on a new chapter in my life.

Click here to read the rest of the article mentioned above.

Our Memories Can Serve As Positive Affirmations

A good way to pull ourselves out of a sad fog, is to remember something that made us happy. Our memories can serve as positive affirmations. Even though we may firmly believe in the universal law of attraction, we must  also remain acutely aware of how easy it is to slip into worry, hopelessness, and […]

You Reap What You Sow

“Whatsoever a man soweth, that shall he also reap.” Most of us are familiar with this phrase which is in the Bible. Most people assume that this phrase pertains to our deeds, which is true, but it is not the whole truth. This universal law, “You Reap What You Sow,” is also true as it […]