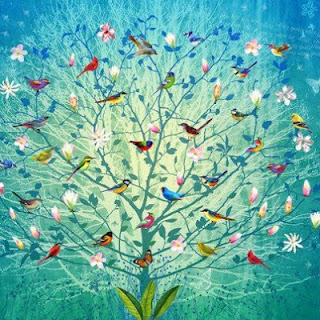 Eckhart Tolle has a series of guided meditations that some might find helpful. One was brought to my attention earlier today. I really enjoyed it because he talked about awakening out of thought into the present moment. He really doesn’t speak much throughout the meditation.

In fact, I wasn’t even aware when it ended as my meditation continued. It continued quite easily because he gave me permission to relax and actually accept the thoughts that entered my mind without watching them glide by or without dismissing them.

It was during these thoughts that I had a meditative vision of fear crossing the abyss.

I found myself in front of a structure similar to the Taj Mahal, all dressed in white and dancing around in the courtyard to a song – I can’t remember the name of it, or the words to it. I only remember the melody.

As I was dancing, I looked to my right during one of my whimsical spins, and saw a beautiful tree, much as I imagine the Tree of Life. The tree was on the other side of a stone structure, or a grouping of boulders. There were birds, green pastures and bright sunshine. I wanted to go over there.

The boulders were not very large, but were stacked up to a height of about 5 feet. Suddenly I just decided to hop up the side and jump over thinking I would land in the grass. But as I hopped to the top I suddenly saw the abyss that the boulders were hiding. The abyss wasn’t very wide, but I couldn’t see the bottom at all, just ragged rock all the way down. I froze in mid air and spun around, going back down the boulders to where I began.

As I landed my anger grew and I became furious with myself. If I had not looked down I would have landed in the grass beside the tree – in the green pastures where the birds were singing. The opening into the abyss could not have been more than two feet wide.

There was nothing wrong with the spot I was in, but I was angry that I allowed the fear to turn me around without even giving it any thought. My gut reaction stopped me, but was it the right reaction?

Perhaps it was a lesson in NOT looking for greener pastures. Perhaps the vision was to remind me how much I love dancing right where I am, right now.

Needless to say, my meditative state ended abruptly with my anger. I mean, meditation and anger do not exactly coexist in the same time and space.

I will continue to ponder the meaning of this surprising story, a vision of fear crossing the abyss that made me angry and ended my dancing in bliss.

Here’s the link to the guided meditation:

Do This meditation sacred

Creating Your Sacred Space at Home

I just read an excellent article on creating your sacred space at home. I agreed with it wholeheartedly, except for item: tip number 4 did not apply to me. It may not apply to others as well. Here’s why: As I created my sacred space for the very first time, which I now change and […]

Our Memories Can Serve As Positive Affirmations

A good way to pull ourselves out of a sad fog, is to remember something that made us happy. Our memories can serve as positive affirmations. Even though we may firmly believe in the universal law of attraction, we must  also remain acutely aware of how easy it is to slip into worry, hopelessness, and […]

You Reap What You Sow

“Whatsoever a man soweth, that shall he also reap.” Most of us are familiar with this phrase which is in the Bible. Most people assume that this phrase pertains to our deeds, which is true, but it is not the whole truth. This universal law, “You Reap What You Sow,” is also true as it […]